View the barometer on slideshare

Hong Kong, April 7, 2016 – QIMA, a leading global quality control and compliance service provider that partners with brands, retailers and importers around the world to secure, manage and optimize their supply chain, today announces its 2016 Q2 Barometer, a quarterly synopsis on outsourced manufacturing and the quality control services industry.

The year 2016 begins with shifts in global trade, ongoing quality issues, and a host of ethical challenges: from structural risks accompanying expansion in Egypt, Bangladesh, and Vietnam, to skyrocketing forced labor problems in Turkey. As the end of the quarter wraps up the first reporting period under the UK's Modern Slavery Act,1 consumer and government scrutiny on global supply chain continues to increase. Consistent with these trends, QIMA has seen growing demand for structural and ethical audits, using additional methods to zero in on forced labor in particularly high-risk areas.

Even more than the slowdown some economist predict,1 the major event for global trade in 2016 may well be the start of a rebalancing and shift in merchandise flows. A prime example of that is Brazil, whose imports from China, its biggest trading partner, plummeted by 60% YoY in 4Q2015.2 At the same time, Brazil's containerized exports to China and the rest of Asia rose, taking advantage of the depreciation of the real. According to QIMA data, the number of inspections in Brazil has tripled in Q1 2016 compared to Q1 2015 – but at the same time, the 13% increase in Beyond AQL rates may signal growing quality problems.

Overall, China remains the undisputed leader in volume for product inspections, audits and testing, even though its global economic growth in Q1 2016 remains modest, estimated at 6.7% – in line with the government-set 2016 growth target of 6.5-7%.3 While international analysts worry that continuing "growth at any cost" will deepen China's existing economic problems,4 China's manufacturing sector showed expansion in March, giving rise to hopes for a continued recovery.5 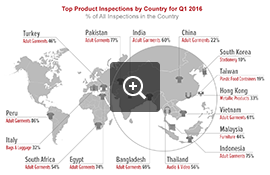 Meanwhile, as Vietnam and Bangladesh remain the fastest export growers among the US' top ten trading partners in Q1 2016, structural risks run high in both these locations.6 QIMA data shows Vietnam as the highest-risk country for structural issues, with 71% of structural audits assessing facilities as "at risk" or "need improvement." Many of these faults are caused by unauthorized expansion of factory premises or unauthorized additions.

In Bangladesh, demand for structural audits tripled YoY in Q1 2016 in the wake of the inspections by the Accord on Fire and Building Safety for Bangladesh and the Alliance for Bangladesh Worker Safety. Accord reports that some 50% of non-compliances have been fixed in its inspected factories,7 but both Accord and Alliance frequently terminate ties with factories because of repeated compliance failures8 and report tampering.9 The Bangladeshi government announced that neither Accord nor Alliance will be extended past 2018, citing the state of the RMG industry as "greatly improved."10 This optimism may be overstated, given the mixed structural remediation progress and the ILRF's damning report on labor abuses.11

In Egypt, where apparel exports have slumped since the 2011 revolution (some 13% decrease in exports to the US, its main market),12 new opportunities for recovery come with the inflow of many manufacturers from Turkey and, notably, Syria.13 Safety remains a consideration: in Q1 2016, Egypt showed the greatest growth of structural audits outside Asia, and 50% of QIMA structural audits revealed that facilities are at risk or need improvement.

The movement of Syrian refugees also resulted in a dramatic spike of forced and child labor in Turkey's RMG sector. 14 Being the world's third largest apparel sourcing hub and the largest host of Syrian refugees makes Turkey a location where monitoring is complicated, and exploitation of vulnerable groups all too easy. Demand for ethical audits increased appropriately, with a threefold YoY increase in Q1 2016 vs. Q2 2015, according to QIMA data. As buyers put a special focus on tracking down forced labor at Turkish factories, QIMA uses additional methods to tackle the problem – such as unannounced ethical audits, and 30-day "monitoring missions" by social compliance auditors.

Along with forced labor, traceability also remains among a top supply chain challenge, according to Verisk Maplecroft's Human Rights Outlook 2016:15 as highlighted by the recent scandal around the Australian surfer brand Rip Curl. Some the brand's clothes, while labeled "Made in China," were actually sourced from factories in North Korea – apparently, as a result of unauthorized subcontracting.16

While electronics again headlined this quarter's recalls, including the US CPSC's demand for third-party certification of hoverboards,17 apparel brands are also facing quality problems. Most recently, British retailer Next recalled a selection of children's dressing gowns that failed to meet the UK's stringent flammability requirements.18

As apparel brands feel the pressure to improve quality and safety, QIMA has seen increased scrutiny on specific product safety issues – including metal control detection (ensuring no unwanted – and potentially dangerous – piece of metal is left on the garment, as can be the case when sewing needles break during production). Previously, apparel brands and retailers tended to limit metal control to particularly safety-critical product categories, such as baby clothing and underwear. In Q1 2016, QIMA observed a sharp increase in demand for this service, as many brands implement metal control as standard procedure across the entire range of garments. The brands' concerns may be justified, as 87.5% of metal control audits in Q1 2016 showed improvements were required.

About QIMA - Your Eyes in the Supply Chain!™

QIMA is a leading global quality control and compliance programs provider that partners with brands, retailers and importers around the world to secure, manage and optimize their supply chain. With unique web-based and mobile quality control management, QIMA offers Product Inspection, Supplier Audit Programs and Laboratory Testing services for more than 5,000 clients worldwide. The 2016 Q2 Barometer is a quarterly synopsis on outsourced manufacturing and quality control services performed by QIMA each year (product inspections, supplier audit programs, and laboratory testing).

10. The Daily Star. Tenure of Alliance, Accord won't be extended: Tofail. December 8, 2015.
http://www.thedailystar.net/business/tenure-alliance-accord-wont-be-extended-tofail-183937

17. USA Today. Hoverboards may be seized or recalled due to fire risk. February 20,2016.
http://www.usatoday.com/story/tech/news/2016/02/19/hoverboards-fire-safety-consumer-product-safety-commission-recall-seize-impound/80607978/